How to Stop Talking About Innovation and Start Doing It

Innovation has become the catch cry of the C-Suite – the all-encompassing answer to moving our business forward and gaining headway from our competitors.

But what are we really doing about it?

Perhaps we need a little less innovation talk, and a little more innovation action. Sam Nickless, COO at Gilbert + Tobin calls it “getting off the flip chart”. He says there is a portfolio of actions that legal professionals need to take in order to really start driving innovation instead of just talking about it.

Watch the clip below of Sam presenting at Legal Innovation & Tech Fest 2016 to hear the three elements of this action plan to drive innovation.

Sam Nickless is COO for Gilbert + Tobin. He was one of the top rated presenters at Legal Innovation and Tech Fest 2016 and we are thrilled that he will be back for 2017. This year he’ll be exploring the world of Artificial Intelligence, cutting through the hype and showing you how to make a start with AI in a practical way.

It’s about action, I call it getting off the flip chart. I think there’s a lot in the industry, from my understanding of it and it’s only brief, but there’s quite a lot of talk about things, and I think it’s important to get beyond discussing “Is this going to happen, what will happen?” and just trying stuff and getting moving, and I think there’s a portfolio of actions on both the core business and disruption that underlie those actions. 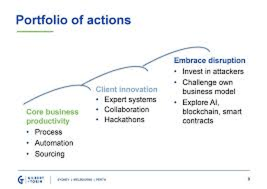 I’ll just give you an example. Some of this pulls in what we’re doing, as well as more general, but I think about it on these three dimensions in terms of the actions.

The first one is productivity in the core business. This is like you have to do this, this is the thing about making sure that you take a time out of all the processes, improve those processes, automate them where you can, look at different sourcing, whether that’s from outsourced and offshore providers, or it’s through different sort of labour markets, different labour models. That just has to be part of everything that a firm is doing at the moment, and doing it as well as they can all the time and delivering that productivity benefit back to the customer, the client, in terms of sharper pricing that should get you more volume, but also in terms of the way in which our business runs and our own margins. To stay competitive and to stay relevant and in the market for some of the other stuff that’s coming is just an absolutely imperative for us all.

The next bit I think is to get into client innovation. We heard some great things over the last two days about what firms are doing around things like expert systems, so offering up solutions to clients that they can use in a more automated way. Collaboration, like the examples we saw about some of the portals that the clients can use on an iPad to interact with the firm and each other. We did a couple of things like hackathons with clients to come up with ideas to help them improve their business as well as ours, but doing things that are client-facing as well as that internal stuff.

The last one I think is embracing disruption. There’s a few different things that can be done there. I’ve got the challenging of our own business model, which I mentioned before around disruption, around pricing and challenging the way we do things; exploring AI and blockchain, smart contracts, just making sure that you’re aware of that and understanding it, starting to experiment with it; and making sure that we are relevant to clients when they ask the question, “What is this thing all about?” Because we’ve often got I guess the incentive, the existential threat incentive to learn these things and to understand them, that some of our clients may not have that opportunity and we can provide that to them, but also making sure we’re thinking about it for our own business as well as for our service to clients.

One of the things that we’ve done – and I’ll talk a little bit about that, it’s sort of an active self-disruption in a way – is to invest in an attacker, in terms of the relationship we’ve struck up with LegalVision. There’s quite a few attackers out there, and there are technology companies that are doing some of the disruption, but the way I see that – and it’s public about what we’ve done, it’s been in the press – is it’s an opportunity actually in many ways for us to have a little bit of exposure to the attacker part of the market. So they’re actually tapping into a part of the market that’s much higher growth than the part that we play in; we’re obviously playing in a much higher margin part of the market, but there’s real growth opportunities there.

We talk about in that smaller-medium enterprise business that there’s a lot of people who are totally underserved in terms of the legal services they get. They’re either not getting legal advice, or they’re getting it from a mate or they’re getting it from their local accountant, and they’re coming in from I guess the informal economy to the formal economy and they’re tapping into that trend. They’re also able to do things that we wouldn’t necessarily be able to do for large clients, including the more automated, standardised work that needs to have that sort of repetitious process, and they’re very good at that, they use technology and they use process management.

So, for us that’s exposure to that but it’s also learning from that, so we’re trying to bring in learnings from their business back into ours, as well as pushing learnings from ours to them and introductions. It works really well in terms of for us to have a bit of a look at the different part of the market and a more disruptive part, so it’s financial exposure as well as learning. 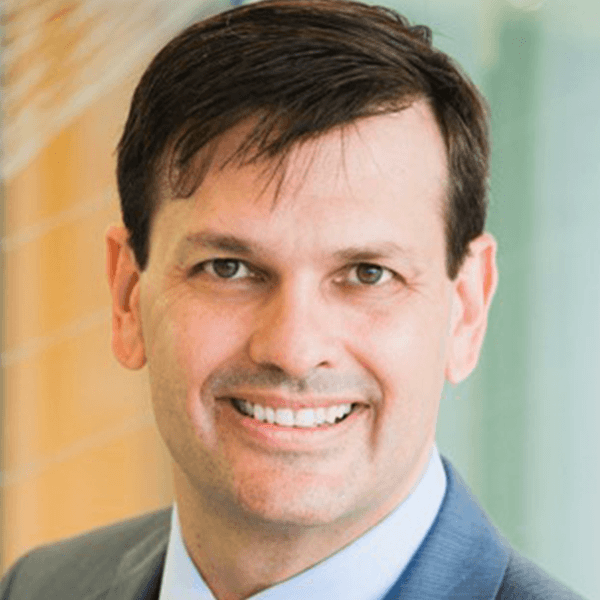 Sam Nickless is the COO of Gilbert + Tobin, which he joined in 2015. He qualified as a lawyer but has never practised – having been a partner at McKinsey & Company, and then held executive roles at NAB, Aristocrat and GPT Group. Sam leads G+T’s operational teams as well as driving the firm’s strategy and innovation agenda.