A New Horizon for Legal Operations at Woolworths

In 2014, with competitors outperforming it on price and efficiency, the Woolworths Group needed a change of strategy. The challenge was not just for the retail arm to reform, but the legal team too. A more brand-aligned approach to law was needed to replace what had become a complacent legal culture.

At Legal Innovation & Tech Fest, Chief Legal Officer and Company Secretary for the Woolworths Group Richard Dammery outlined how he took an unfocused in-house legal team and transformed it into a responsive, client-focused unit. Key to this transformation was the development of legal operations.

A Journey of Change

Woolworths is not just a supermarket chain. The company also owns the BWS and Dan Murphy’s liquor outlets, Big W, and hospitality management company ALH Group. In New Zealand, it owns the Countdown supermarket chain. Other significant investments include Quantium, a leading Australian big data company. With roughly 220,000 employees and a turnover of around $60 billion annually, its legal needs are immense.

“We’re not there to supervise external lawyers doing our legal work. We work with external firms from time to time, but we want to bring the same level of quality of professionalism to our work inside the group as any other top-tier law firm.”

Dammery says the legal team he joined in 2014 was markedly different to today’s.

“Woolies was quite different too,” he adds. “Its history had been very much a top-down, corporate centre-led operation. Everything centred around the CEO’s suite – the CEO sitting next to the CFO, who was sitting next to me. It was very hierarchical.

“But we’ve blown that up. When CEO Brad Banducci came on board, he said we’re not going to be like that any more. We now work in flexible, open-plan environments. None of us have offices, we just go where we need to go.”

Dammery says legal accountabilities were not clear. He began aligning senior lawyers to each of the business arms, making it clear who had responsibility to that client. He believes the reasons for the decline in connectedness and agility in the legal team was that Woolies had been so successful for so long that doing the same thing seemed fine.

But when Woolworths lost in sales to Coles for 36 consecutive quarters, the group decided to make a $1.5 billion investment in price. This also affected legal, where the cost base was “very high”.

“Back in 2014 we were spending $70 million on legal support to the group,” he says. “Last year it was $36 million, a significant change over four years.”

The Three Horizons of Growth framework is a descriptive and diagnostic tool for any organisation that wants growth, but believes it is stagnating and lacks the drive for change.

“We are in the second horizon now and a key part of that is embedding our legal operations,” Dammery explains.

“There is no top law firm in the world that doesn’t have excellence in its legal operations. I don’t think that the operations teams in law firms get the credit or respect they deserve because they are seen, by the partners at least, as the hired help.

“But the reality is if you don’t have great operations support, knowledge management and accounting systems, then you’re not going to be much of a high-powered lawyer.”

Dammery believes if the perception of the legal team is not what it should be, if deeply trusted advisory relationships with senior management are lacking, then the legal team itself needs to fix the problem.

“I’ll let you into a secret: in a vast organisation like Woolies, no one gives two hoots about the lawyers. We might think we’re important, but they see us as a necessary evil at best.” Helping the client achieve what they want to achieve and becoming a “useful necessary evil” is part of the legal team’s growth, he adds.

“Part of that is never calling out a problem without attempting a solution. Sounds easy, but it’s hard to do. Although management often demands immediate answers, the best answer can be that you want to sleep on it. Because ultimately we are being paid for our judgement, our ability to advise on a narrow legal question.”

It’s this quality of being valued for its judgement that will be the third horizon of the Woolies legal team.

“We all want to be trusted advisers, we all want our clients to listen to us and value our advice. When we speak, we are giving value to their decision-making. That’s our third horizon.”

Dammery says Woolworths chose to attack its legal cost base first. Then, faced with increased competition, it needed a map for future growth – a map supplied by the Three Horizons framework.

The focus is now on the framework’s second stage: developing the legal operations team, developing in-house legal talent and bringing legal into alignment with Woolworths values and goals. Using legal technology to help decision-making in areas like property options is part of that streamlining process.

One of the issues for Woolworths is the size of its property interests. Maintaining leases on shopping centres and stores for all its retail and storage operations requires continuous legal scrutiny.

The legal team now applies an algorithmic tool to the decision making for property option renewals. Dammery describes it as a “work in progress”, but by clients answering a series of simple qualitative and quantitative questions, the program makes the decision whether to exercise the option. The subsequent legal documentation is then also automated.

“That will reduce legal work in the team by at least one paralegal and a couple of people inside the property group. So the benefits accrue across the organisation, not just within the legal team.”

In the future, Dammery believes innovation is as much about culture and willingness to change as it is about technology.

“There’s no doubt technology is going to change legal practice in every domain. It means that one of the critical attributes of an in-house lawyer in the future will be understanding this technology and knowing how to implement it.” 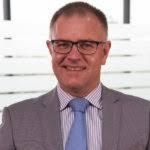 Richard Dammery is Chief Legal Officer and Company Secretary for the Woolworths Group. He is responsible for legal services, governance and shareholder relations, and group compliance.